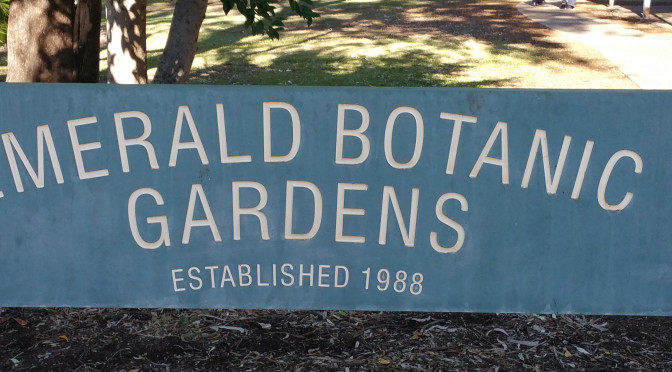 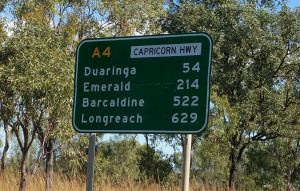 We have now begun to head west along the Capricorn Highway. As its name suggests, it quite closely follows the Tropic of Capricorn. After a short period, we had left the sugar cane behind and came on dry pasture land, much like you might find around Goulburn. However, every 40km or so there was another big coal train running towards the coast.

Soon we came on to Blackwater, which had a huge open cut mine just to the south of the highway. As we disagree with Tony Abbott that the future of Australia is coal, we kept going. Although our goal was Longreach, we decided not to drive 700 km in a day so stopped at Emerald in the Botanic Gardens, where we found 8 other caravans with exactly the same idea.

That evening I went for a walk with the dog and found the maze. Although it was very dark (no moon, just stars), the Meleluka Maze was quite easy to solve as I could see the scuff marks of the foot prints of the previous visitors in the soil. Assuming no-one got lost in the maze, and everyone makes a random choice at each corner, everyone must walk on the right path, but only a few will take the wrong path. So by following the most footmarks, I made the right turn every time. (My brother, Jean-Leo, would ask, “…but what is a crowd of Japanese tourists went into the maze, took a wrong turn and called for a helicopter to get them out?”)

After the maze I did the Celestial Garden, but that was just a set of concentric circles and no challenge at all to solve. I tried to find a wrong path and failed!

On the way back I met a large cane toad in the middle of the path. I shone my torch on it so the dog would avoid it. The dog was curious and stuck his nose against it. The toad just ducked a bit but showed no concern. Fortunately the dog moved on.

On the way back I met a chinese gentlemen with a long beard doing something to the trees with bread. The following morning I heard and found what he was up to.

We stayed in Yeppoon for a few days while pondering whether to head north or west. Eventually we chose west, and have revised our itinerary. Yeppoon in a beautiful spot just in the tropics, but otherwise quite reminiscent of the south coast of NSW. The bird life is quite different. We saw a lot of this bird around the bushes and in the camp site at night.

One night, on a dog walk, we came on a few quite suddenly. The dog chased one into the scrub and disappeared into a bush. I pulled him back and fortunately he had caught nothing. Upon returning to the caravan, I found the dog was covered with burrs.

Carmel and I spent the evening pulling and brushing them all out, with many yips and yelps from the dog. Moral of the story – if you chase after roadrunner, you come off second best!

Later he took the Nissan Patrol around, but I must have been too fearful to take a photo. 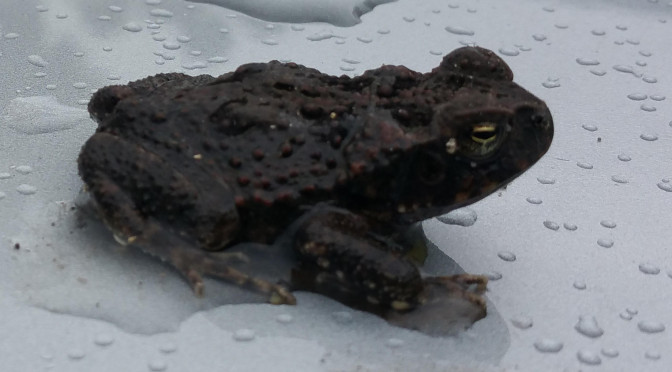 Just as we were leaving the Brunswick River, I rescued a poor little froggy who was hiding under the wheels of the caravan. I popped it onto the car bonnet to keep it from being crushed and to get a photo. I have since realised that it was our first cane toad. Fortunately, I have not come out in a rash or had weird dreams from touching him.

I am sure rescuing cane toads is on par with getting involved with foreign wars, so I expect to face the full force of the law on my return, 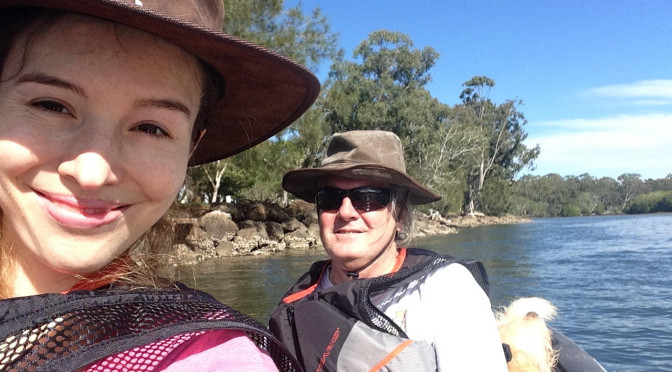 We were joined at Brunswick Heads (just north of Byron Bay) by Clare, my niece.  She was interested in checking out Byron Bay and also  catching up. The third day she was with us was beautiful and sunny, so we took the canoe onto the Brunswick River.

With the tide turning, we were able to mosey along the riverbank, annoying many birds, fish and rays. The pelican was the most relaxed, watching our approach without disturbing his grooming.

Past the island, the environment changed from mangroves and mudflats, to forest and sandy beaches. We sneaked up on an eagle having a bath.

When we found on why, I began paddling quickly. Can anyone see what is to the right of my paddle-head?

Here is the cause of my anxiety. We got to within 5 metres of her before I clued up to the interesting diamond pattern in the tree.

She was about two metres long and did not move. Still, I believe Python’s should be admired behind a nice glass wall with a near label assuring me that it is not deadly. Clare insisted we go back for a better selfie, but if the snake joined us in the boat, no amount of restatement of the word “harmless” was going to stop us from swimming back to camp!