Sausages can taste very nice by the Murray. 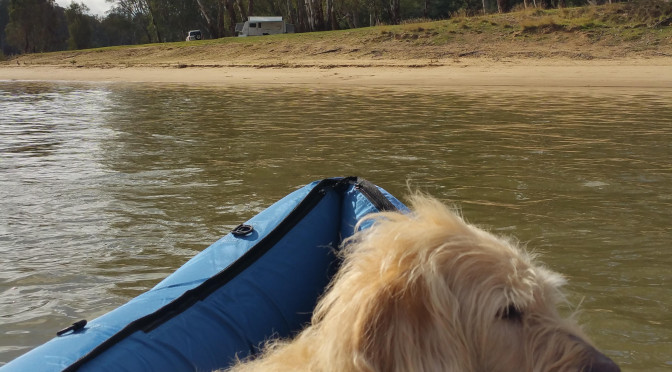 Fri 12 June – On Friday I had the honour of rowing for Victoria, unusual for a New South Welshman.

The location was Paradise Beach, an unmarked beach in Barooga State Forest on the Murray River. The place was not sign posted at all – it was off a 4WD track. I drove past it twice thinking “that is surely not it”. (We actually found it in a great book titled “Bush Camping with Dogs”. It is surprisingly well researched, and also found

us the Tumut campsite.) However, a chat to the local constabulary confirmed it was. We arrived late at the location in light rain – not ideal for 4W driving. When we reached the Murray, we just stopped and made a quick camp. The following morning showed this to be a great choice.

The Murray River is a quiet river at present (or here) and sides are either coarse sand (such as on Paradise Beach) or reeds. So I inflated the blow up canoe we found at the camping show and followed in the wake of Huckleberry Finn and Tom Sawyer. 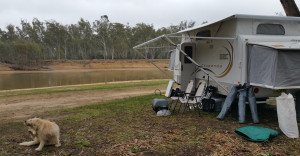 Alex was busy talking on the phone so opted not to be on the first canoe attempt. Surprisingly, the dog was a willing participant.

So off we went, rowing away from NSW and into Victoria. Despite the slow flow, upstream was quite hard work and I had removed my warm vest after 20 minutes. On the way back downstream, we met some fellow dreamers.