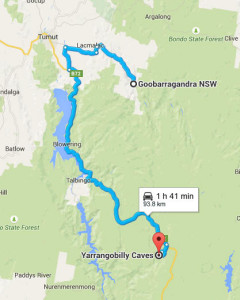 Wed 3 June – As the crow flies, Yarrangobilly was quite close to our camp site. Unfortunately, we had to follow the roads, so went via Tumut, past the Blowering Dam and up into the Snowy Mountain highlands. As you can see, what I thought would be a quick morning trip became a day trip,  but quite fascinating.

The caves are quite an old NSW tourist attraction. There are over 400 caves in the cliffs of which 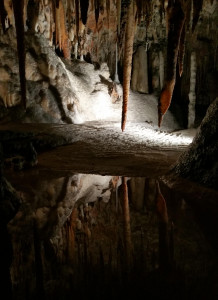 5 have tours (for the non caver). Apparently, cavers are obsessed with finding new caves and 3-4 new caves are claimed each year, but are rarely counted. Apparently you need to fit more than your head in a hole to call the hole a new cave.

The cave we visited is called the Jersey cave, so named as a part of a funding proposal to the governor, the Earl of Jersey, of NSW at the time it was opened.

The cave is found at the top of a deep gorge, with other caves down the cliff. Like other caves, it was formed by dissolving limestone leaving calcium carbonate deposits at different speeds. The colours form from other chemicals. The white is the pure calcium carbonate, the red is stained by iron oxide, and the black is ash sucked into the cave during a bush fire.

The tour took over an hour although we did not go very far – I think we only did eight chambers –  but there was so much in each, and so many different shapes formed from small variations in the process.

On the return home, we ran into some of the local bird life.

One thought on “Yarrangobilly Caves”